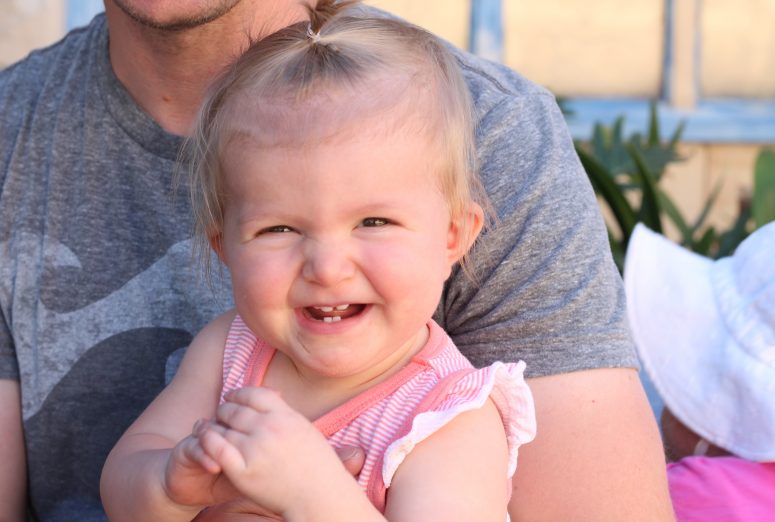 ONE whole year with our sweet little Aria Kate. I always like to call her Aria Kate because I really love both of those names. We debated on using either one as her first name– and Mike gave me a solid no when I tried to make both her first name– “but then she could pick! And how cute is it to have TWO first names?” I really tried there. I may have even used it for a bit. Of course a run-of-the-mill “Mike” wouldn’t agree to something so crazy. A Raina though? We’re up for ALL THE NAMES. The indecisiveness in me really shows when it comes to naming children. It’s permanent after all.

Aria arrived a full week early and just one day after her sister’s birthday. It is so amazing to have two girls so close– and close in terms of both being born around the same date, therefore hitting many of the baby milestones at the same time of year. But, they are such different kids and have been since day one. Despite what everyone told me to expect, Aria’s arrival was much slower than Vienna’s. By “much” I mean an hour, but that’s a lot in labour time. (People who were in labour for days will probably kill me now). I was warned over and over again that V’s arrival was so quick and so crazy that Aria would just shoot out of me. I was terrified of having the baby in the truck en route to the hospital. This made me trust myself far less in knowing when I was “ready” to go.

We arrived at 7 a.m. and Aria joined this world at 10:20 am weighing exactly 8lbs. Her delivery was chaotic to say the least. A staff change-over just as things were happening paired with a bat-shit-crazy nurse who not only forced me to have blood drawn during the worst possible time of labour (fellow moms know exactly what this moment is) but also made Mike leave me and go riffle through my purse looking for my care card to… prove it was me (??) made for a chaotic scene. But, Aria arrived safely and before long was in our arms. Ahhh. That moment. This entire paragraph may be TMI, but us Moms, we share birth stories like battle scars. We checked out of the hospital at three that afternoon, just five short hours after she was born. Whirlwind.

This past year has been amazing watching Aria grow. At 3 months Aria was diagnosed with torticollis (essentially tight neck muscles and in Aria’s case caused due to her position in the womb) causing her to have some issues with strength and head shape/growth early on. Around months 4 we started visiting doctors and specialists every few days and she was a total trooper through it all. She did amazing in all of her treatments and won over everyone with her sweet disposition. I’m so proud that together we figured things out and she now has full strength and no other issues related to it. It’s truly amazing how far things have come for her.

Aria is my girl to a T. I call her my judgy baby, as she is always carefully watching everything and everyone, and makes people work fairly hard for a smile. And, she’s often frowning or scowling, I always say “that’s just her face!” since she really is the happiest baby. She’s a fierce little monkey– she growls on the regular and when she hugs or kisses you it’s a full-body squeeze and a head-bang-kinda moment. Her and V can either be found fighting over a toy, fighting over me, or fiercely hugging each other. She sleeps like a champ and still loves her little Mrs. Mouse stuffy. She is curious and gets into anything she can. The faster she gets the more of a handful she’s becoming!

Aria has stayed such a baby to me. She seems so teeny and clings to me with her legs wrapped tightly and high around my waist. She’s a total hip baby, always with Mama. She’s crawling (since 10.5 months) and pulls to stand up  holding on to things, but doesn’t show signs of walking. And that’s o.k. by me!  One of my favourite things right now is when she discovers something new. Her eyes light up as she figures things out. I’ll be holding her and she’ll reach to open and close a cupboard door, and she’ll do it a few times and then look at me and a huge smile slowly spreads across her face. The. cutest. Aria has three words: Mama, Dada and shoe. Yep, shoe. I thought maybe it was just a coincidence, but it’s happened too many times for it to be possible. Like I said, her mother’s daughter. Plus, she looks exactly like I did when I was a baby.

Happy one year birthday to my spunky, happy, crazy-haired little Aria. We are so lucky to have you in our lives. xo

Scroll down to see a one year snap shot of Baby A. The first two pictures below are some newborn favourites taken by the talented Jennifer Harwood from Blink Photography. Thanks Jen! 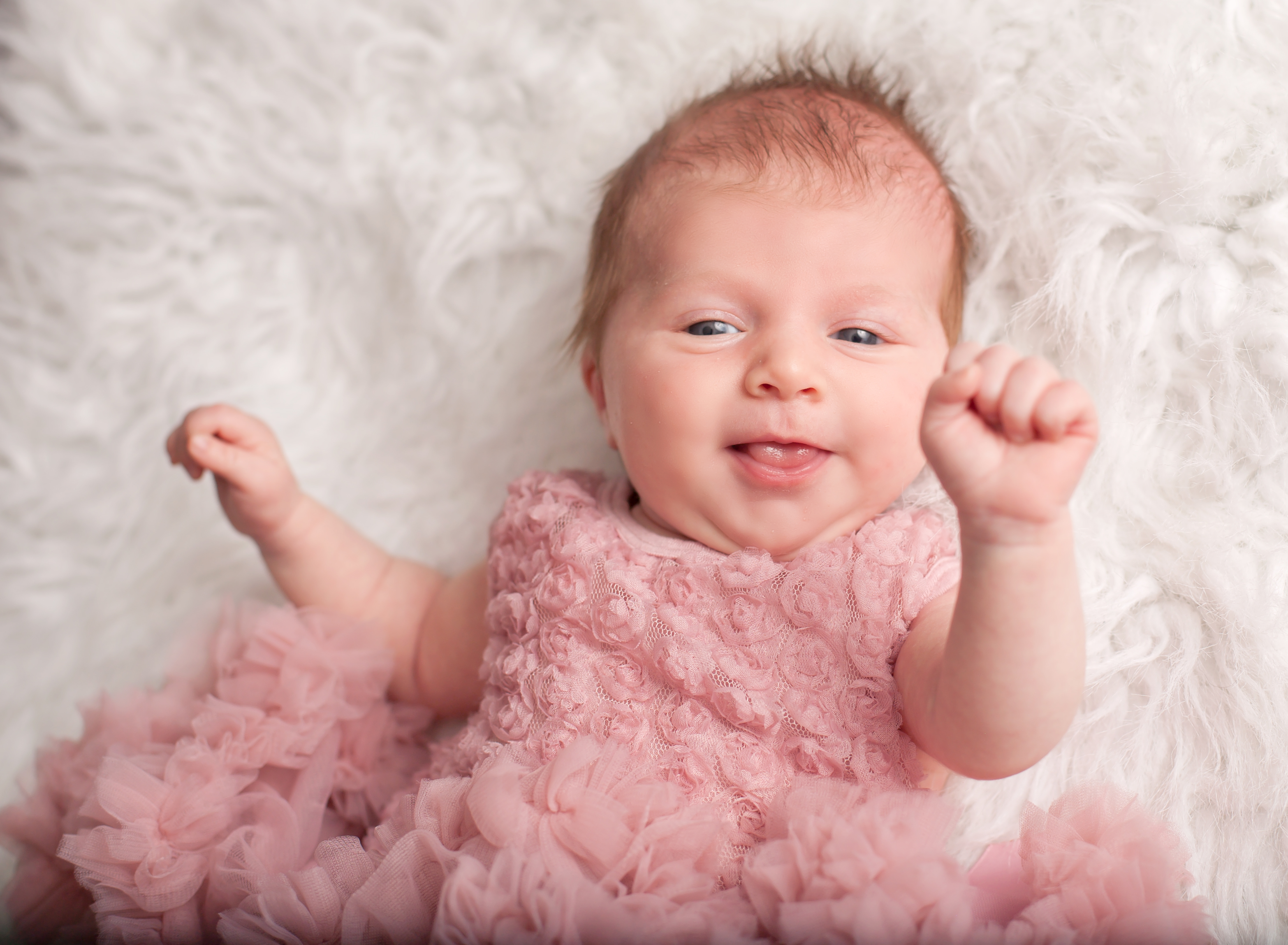 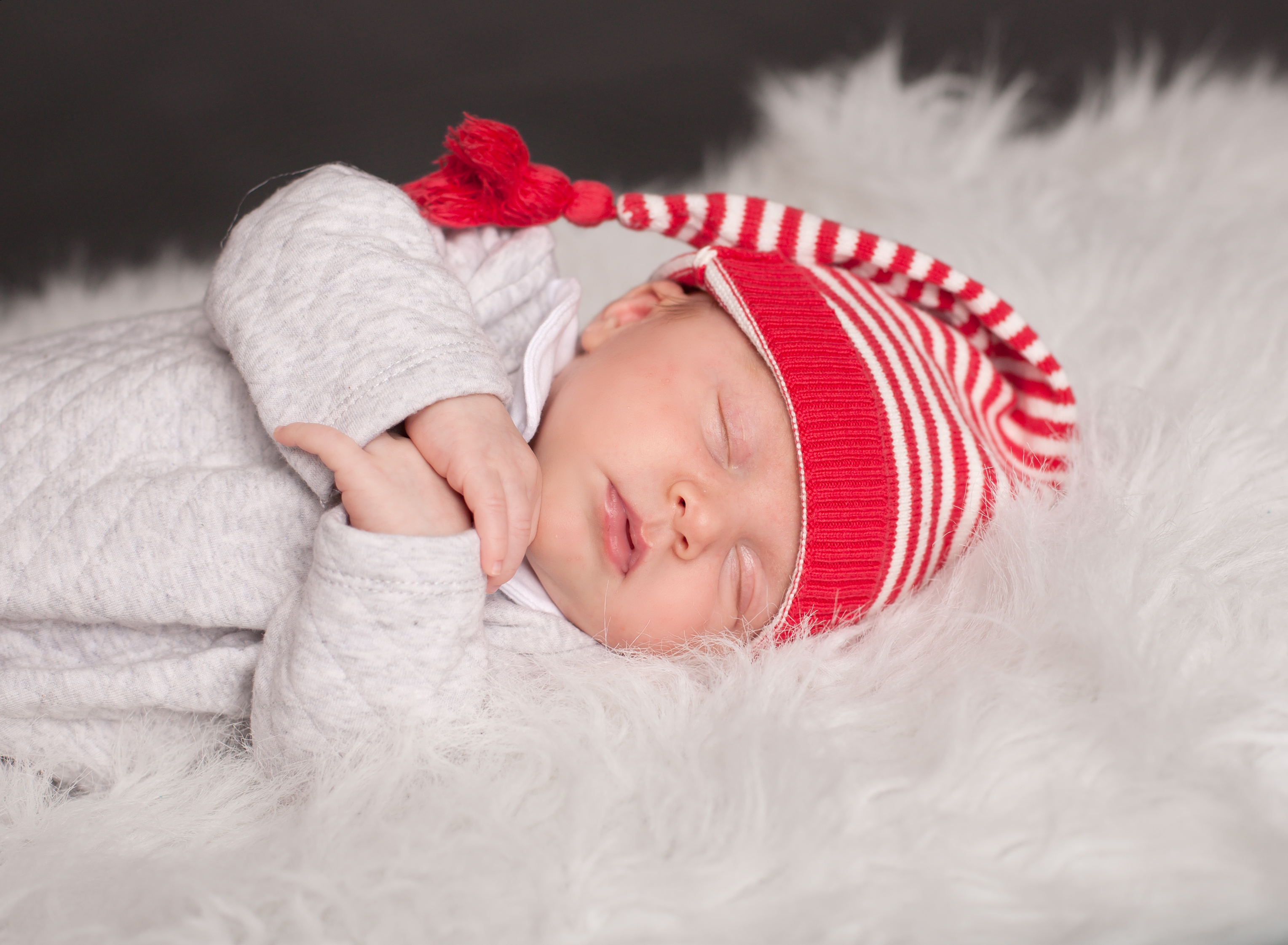 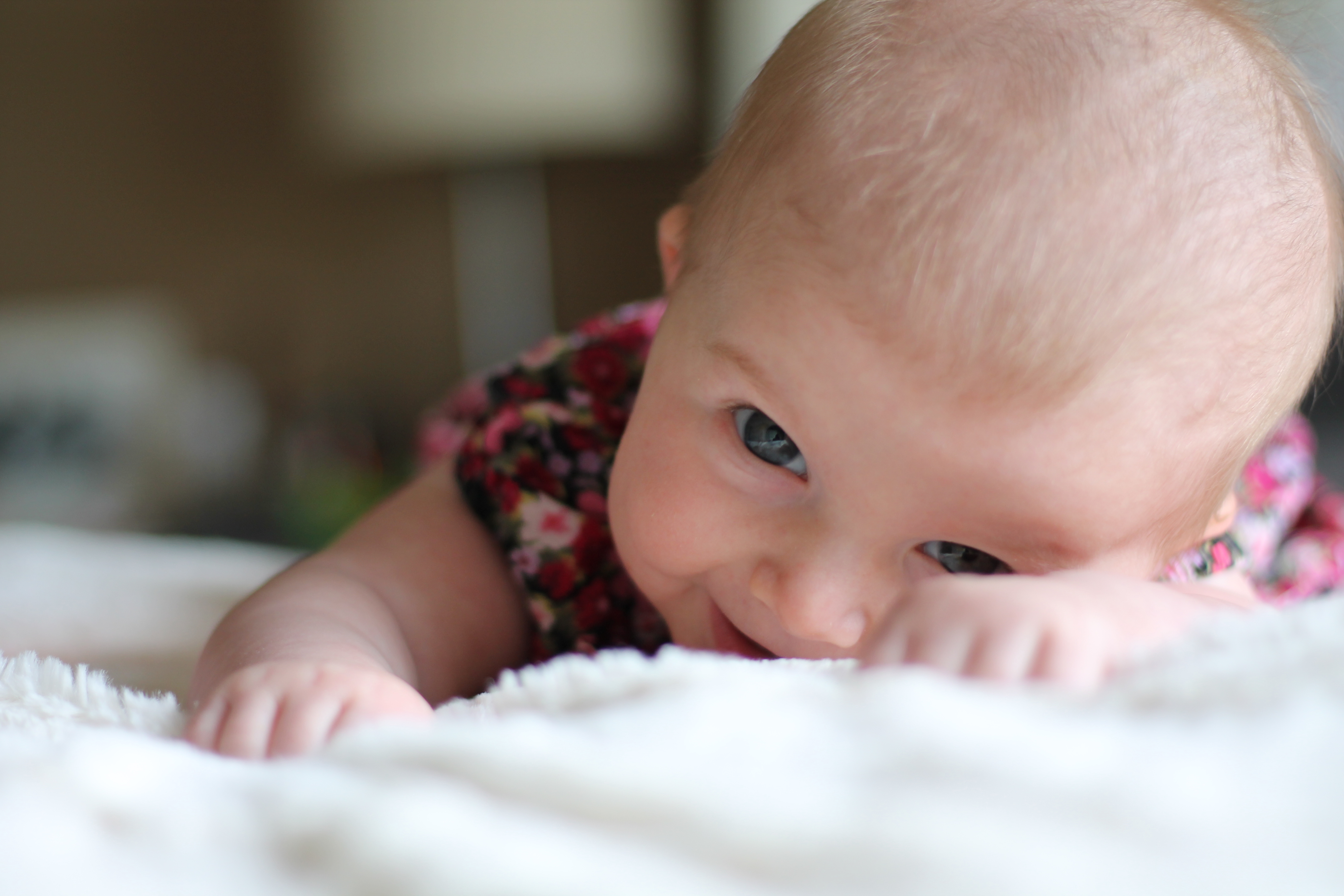 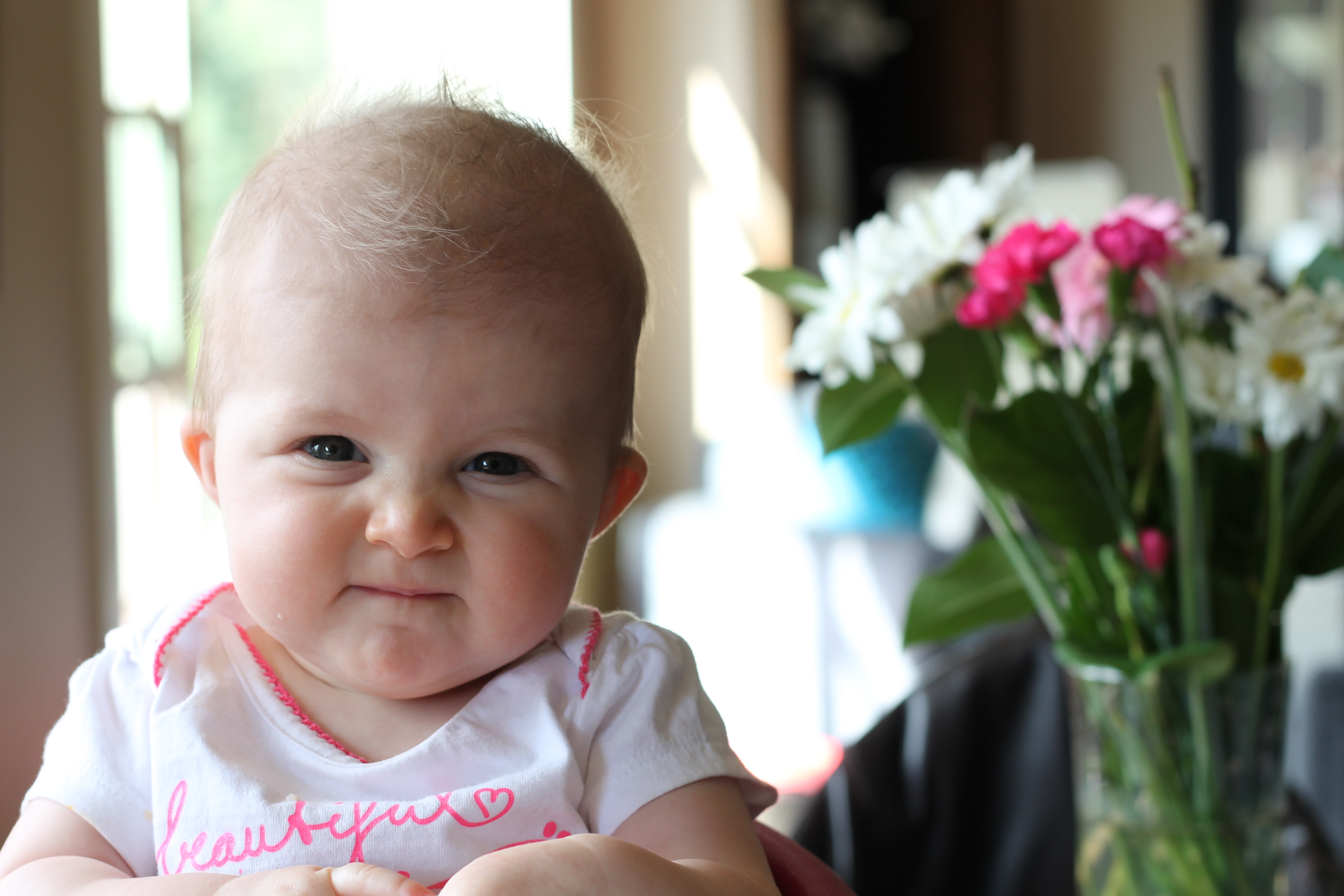 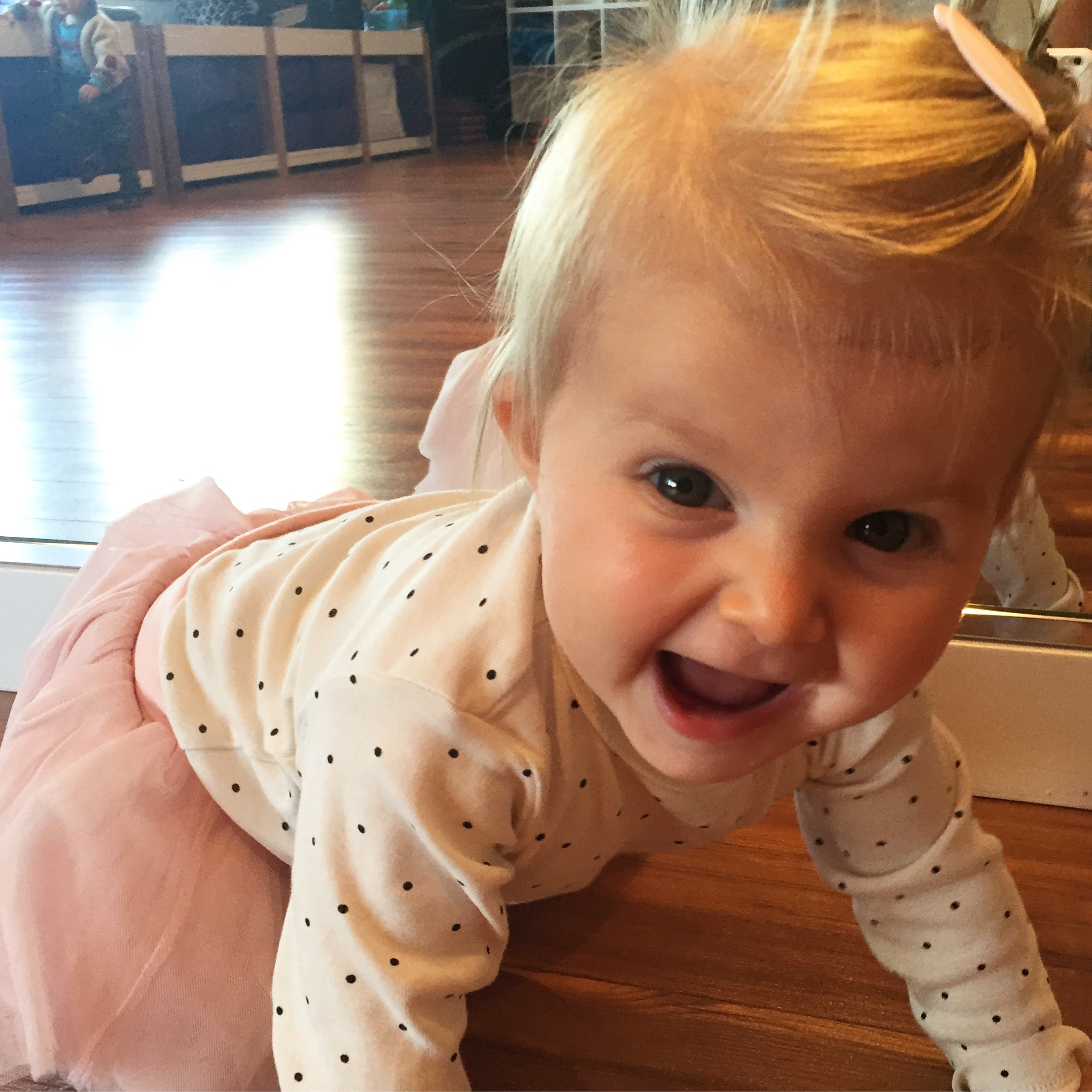 Favourite activity: Dancing, getting into things, Mommy carrying me

I love: My sister, baths!